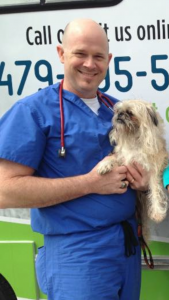 Dr. Robb Jones is an Arkansas native. He grew up in central Arkansas until attending the University of Arkansas in Fayetteville. He received a Bachelor of Science degree in Chemical Engineering in 1993. He then accepted a position as an Air Permit Engineer for the State of Arkansas Department of Pollution Control and Ecology which helped him decide to chase his childhood dream of becoming a veterinarian. He received his Doctor of Veterinary Medicine from Louisiana State University in 1999. Following graduation from veterinary school, he completed a Small Animal Medicine and Surgery Internship at the University of Florida. Dr. Jones then went to work as the Assistant Chief of Surgery at the Humane Society of Missouri in St. Louis.

After being away from Arkansas for over 10 years, the Jones family made the move back home to Fayetteville. Dr. Jones worked as the staff veterinarian for the Fayetteville Animal Shelter and has traveled between several northwest Arkansas veterinary clinics performing orthopedic surgeries. He also has been providing veterinary coverage for other veterinarians who have been taking occasional time off from their practices.

Dr. Jones has a wonderful wife, two great children, two dogs and a cat. He enjoys living and raising his family in Northwest Arkansas and is happy to be back providing veterinary care for his home state. 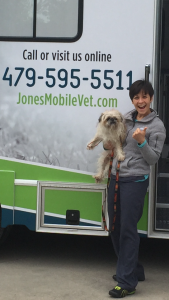 Angela Marin is a native to Arkansas as well as a Native American. She graduated with Bachelor’s Degrees in 2005 from the University of Arkansas. She was lucky enough to enter the field with Dr. Romy Wallace and is now thrilled to join Dr. Robb Jones on Arkansas’s first small animal mobile vet practice! She has traveled north to the New York/New Jersey area and south to the Costa Rica/Peru areas but can’t stay away from Fayetteville! Angela, her fantastic husband, 2 genius daughters and life-long mentor, Bookitty, could not be happier to be on the Jones Mobile Vet Service team!!